This is for them: going back to the grassroots 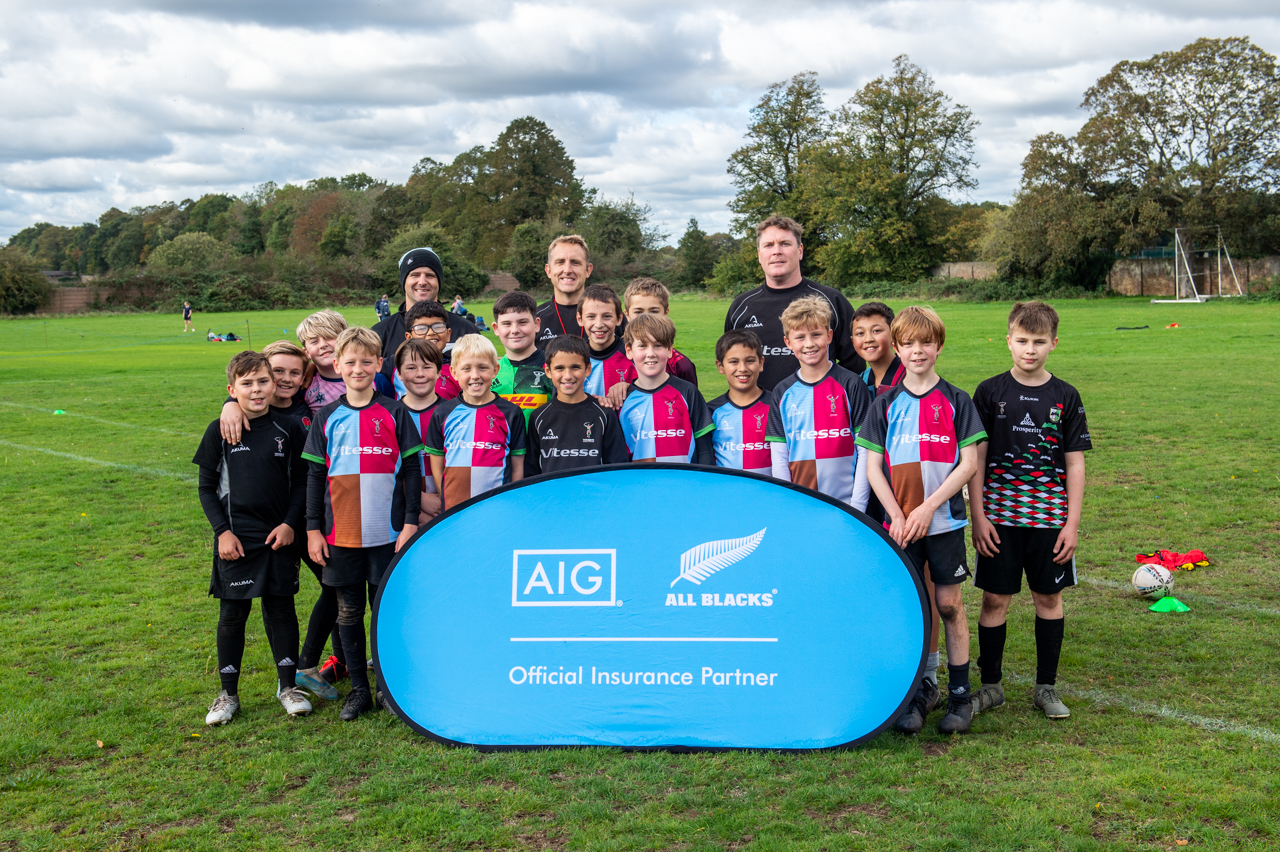 I’ve had the pleasure and the privilege of being involved in AIG sponsorship in the UK since I joined the team in 2018, having been a rugby player and fan for most of my life. And whether it’s been hosting employees for a breakfast with the All Blacks or meeting beneficiaries of children’s bereavement charity Winston’s Wish for a session with Richie McCaw, it’s been pretty memorable stuff.

This time around, our activity was geared up to support the ‘This is for them’ campaign which we ran in the autumn of 2019. In a nutshell, we wanted to get across that our products are really there to look after the people that matter most to you. No one wants to think about something bad happening to a loved one, but the selfless act of putting some kind of financial protection in place means you might not have to worry about them so much.

And the link to rugby? Well just like us at AIG, New Zealand Rugby believe that we are at our best when we are thinking of others - their motto is to always 'leave the jersey in a better place'. When they step on to the pitch, they play for so many more people than themselves, whether that’s their family, friends or fans. They’re leaving a legacy - just like protection products.

So as part of the campaign back in October 2019, we asked rugby fans up and down the country to share images of how they go the extra mile for their team. The competition was won by Kaiser and his dad Sebastian, and the prize planning was started in earnest. We teamed up with former All Black turned Harlequins player and coach Nick Evans to put on a training day Kaiser and the Mini Quins would never forget.

But as we’ve all come to know, 2020 has thrown event planning its fair share of challenges. After February’s storms and the arrival of coronavirus, we finally managed to get a COVID-secure date in the diary. Third time lucky was a gloriously sunny Sunday in south-west London, where I got the chance to visit Kaiser and his teammates.

As soon as I arrived, I was greeted by a true rugby community. Parents, grandparents and siblings (& even family dogs) were there to support their budding young sports stars, with rugby balls flying left, right and centre. Whilst the action was taking place on the pitch, I spoke to Sebastian, Kaiser’s dad.

‘Following rugby and AIG on Twitter, I saw the competition tweets come out. And being involved with the Mini Quins, it seemed the perfect fit. Today has been awesome. I think the kids really had a great time and it was a fantastic, once-in-a-lifetime opportunity. It means so much to Kaiser, because it’s where he’s making his lifelong friendships. He’s known most of these kids since a very young age and it’s really a big part of his life.’

After a quick warm up, Nick joined each small group of players in an action-packed skills and drills session, featuring kicking, catching the high ball and even some Australian Rules. It was so clear to see the energy and enjoyment the children got out of being able to spend a few hours with their mates. Truly teammates indeed. By the queue at the end of the session for autographs and pictures, I think it was clear how much they all enjoyed it - enjoyment that went both ways according to Nick.

‘It was great to be able to join Kaiser and his teammates and get back to some grassroots rugby coaching. Some future stars there for sure!’ 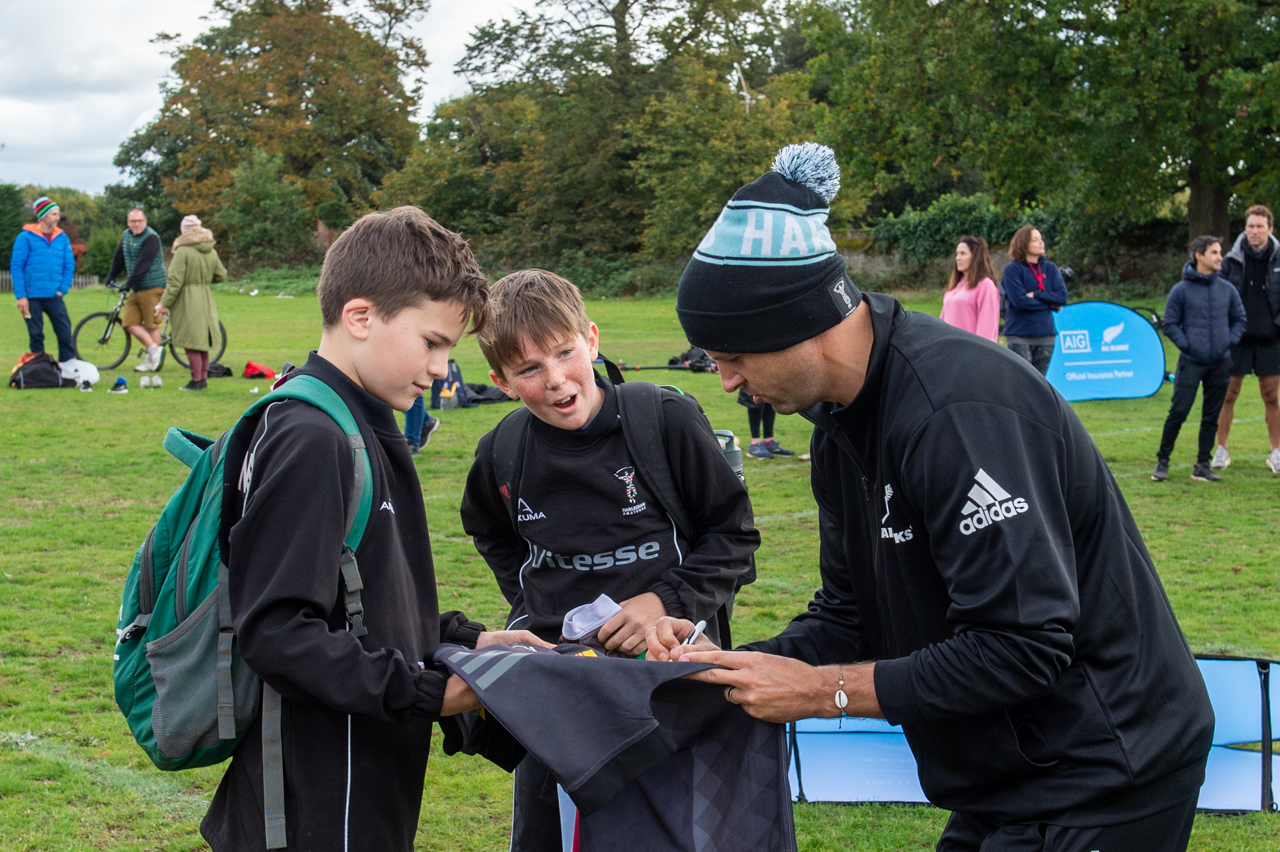 I also managed to catch Kaiser for a quick chat in between photos.

‘I really enjoyed it - playing with all my friends was probably the best experience ever and Nick was really nice. Every week I meet new people who I’ve never seen before, really enjoy working as a team with them and scoring lots of tries.’

And the coaches from the Mini Quins had their say on having Nick down to visit the club too:

‘It’s that ability for the kids to have a role model that they’re looking up to. Somebody that’s played the game, obviously gone on to coaching and come back to grassroots rugby and given his day up to support the kids.’

What really struck me about the day was how important family was at the club. It wasn’t the parents out there running about and getting (a little) muddy, it was about them seeing their children have a great time and the happiness that brought them. Smiles all round. And for me, it really did bring home that the best things we do in life, we do for others.